Scout Neville Riley from 1st Holyhead Troop saved the life of a local boy, who nearly drowned off the coast of Holyhead. 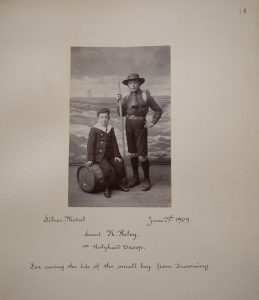 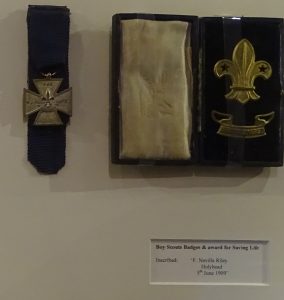 Riley was awarded the Silver Medal for his gallantry and bravery, which no longer exists as a gallantry award, but falls somewhere around the Silver and Bronze Crosses. Riley, whose full name was Frederick Neville Riley, actually ended up serving in the Merchant Navy in both World Wars, saving even more lives on the water.

He was made a Captain and became highly awarded, eventually being awarded a Distinguished Service Order. After the World Wars he emigrated to Australia, where he spent the rest of his life.

To the left are his original medal and badge.

People and leaders from Beaumaris gathered together last night to join a Vigil for Ukraine. Beavers and Cubs from 1st Beaumaris Sea Scouts proudly held the flag of Ukraine and the World Scout Flag. We stand for peace

Our first Squirrel Drey on Anglesey opened last month at 1st Menai Bridge! If you are interested in joining Squirrels or volunteering with the Scouts? Email us on DC@scoutsmon.wales

Would you like to see more improvement to Talwrn? Vote for us using the link to the Your Community, Your Choice fund in the hopes we can get some more equipment for our campsite!
#ScoutsMon #SkillsForLife